Rowena Nichols, long time ReadWest Volunteer Tutor, passed away March 14, 2018. She was 90 years old. She tutored English as a Second Language and Basic Literacy Adult Students. She tutored a dozen adult students during her years at ReadWest. After a stroke confined her to a wheelchair, she continued to write newsletter articles for ReadWest on Tutoring Adult Ideas called, “Rowena’s Corner.”

Later she wrote a series of lesson plans centered on health that are available in the ReadWest office. Rowena was honored in 2010 with the ReadWest Hero Award for her many contributions to our Adult Literacy Program. Rowena was working on her second book about Stroke Recovery when she passed away. She will be deeply missed. 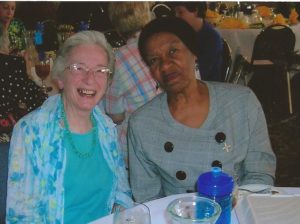